RMX-1000 Remix Station is an innovative technologically advanced device for enhancing DJ performances with its ability to create and add a variety of new and unique remix effects, as well as rhythmic sampling capabilities. The RMX-1000 incorporates four remixing functions: Isolate FX, Scene FX, X-Pad FX and Release FX for simple musical arrangements with intuitive control, all accessible at the user’s fingertips. The device comes with Pioneer’s remix box editor software for customizing almost every function and feature of the unit, while the hardware itself can be used as a USB controller to perform with the included VST/AU RMX-1000 Plug-in.
Scene FX allows users to choose between 5 build up or break down effects
Isolate FX focuses on HI/LOW/MID frequency bands
X-Pad FX enables users to develop and add new sounds Release FX lever eliminates the current music and leaves only sound effects
Remix box software and RMX-1000Plugin VST/AU plug-in software included
High quality sound and Easy connection to DJ mixer or studio computer 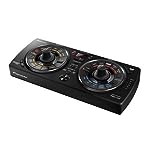